The Show must go on!

This showbiz mantra became a reality a few weeks ago in Sturgeon Bay!

Early on, all of the live performance venues in Door County made painful decisions to cancel their 2020 seasons. However, one community theater company found a way to creatively provide live theater to Door County audiences. Rogue Theater co-founders, Stuart Champeau and Lola DeVillers, had been attending the outdoor drive-in church services at Prince of Peace Lutheran Church in Sturgeon Bay, when they were struck with the idea that if there can be drive-in church and drive-in movies, why not drive-in theater? With the generous support of Prince of Peace in providing the parking lot, sound system, and radio frequency, and a long time patron providing the flat-bed trailer as the stage, Stuart and Lola developed a line-up of plays, mostly comedy, to fill weekends in July and August. Actors would wear microphones, plays and skits were selected so that only one or two actors were on stage at a time and audiences parked in the church parking lot, staying in their cars while tuned into a radio station to hear the actors. 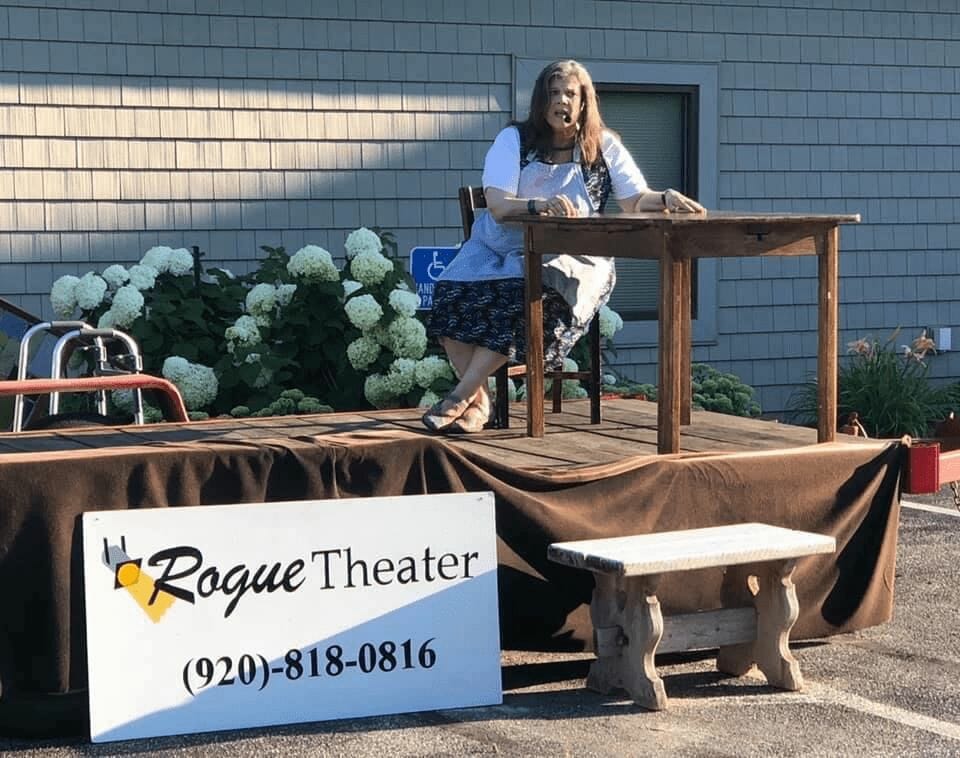 I was honored to be asked to perform in the play, “Alabama Bound”, one of the five vignettes about women in trouble. With the constraint of performing outdoors without lighting to enhance the script, performances took place during early evening daylight. The first night was a perfect warm summer evening. Everything went off without a hitch and we received a glowing review by a local theater critic. The second night, however, presented a weather challenge, as it started raining an hour before the performance, and was forecast to continue raining on and off throughout the evening. Just before showtime, a large patio umbrella was placed on the stage. The actors had to modify their stage movements to stay under the umbrella in order to stay relatively dry and performed as though they were on Broadway! The show did indeed go on and at the end of the performance we were rewarded with a resounding blasting of horns signifying the audience’s appreciation and approval. It was a wonderful night!

I have been struck by the creativity shown in presenting so many forms of entertainment virtually and, on occasion, live by curbside or driveway concerts, virtual choirs, zoom play readings and other alternative performances. These imaginative options provide a welcomed escape during these stressful times, a moments to enjoy and savor the talent of so many Americans.

P.S. This is from Pipka: Donna’s performance was fantastic! She is an exceptional actress but I still can’t figure out how she can memorize 25 minutes of dialogue to do a one woman show! Brilliant!