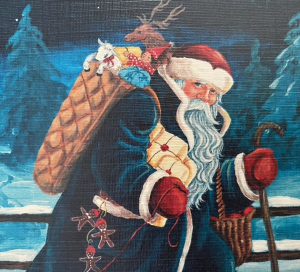 Pipka’s beautiful Christmas cards may be framed.
They are 6” x 9”, printed on linen card stock with a matching envelope.
The cards are blank inside. Pipka has written a story about the Santa on the back of each card.
$6 each
A set of all 9 images is only $45
Free shipping on cards.

Julupukki means "goat man" in Finnish. In many countries, during the 19th century, "Santa" was an authoritative figure who sternly admonished the children to be "good". He wore a frightening costume to bring this message home. The Finnish Santa wore a goat costume until, as time passed, a more benign figure of the gift bringer was adapted. A children's book depicting Julupukki in a blue coat and red hat, wearing a smile of his face, eventually became the iconic image of the gift bringer in Finland. He does have a sleigh and reinheer but they don't fly. And goat, like the one in his basket, are now toys, not scary costumes. Children today anxiously and happily await the arrival of Julupukki at Christmas time. 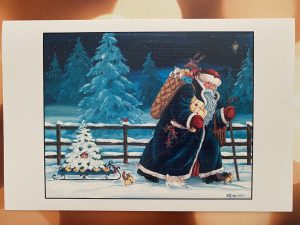 There are no reviews yet.

Be the first to review “Julupukki Card” Cancel reply