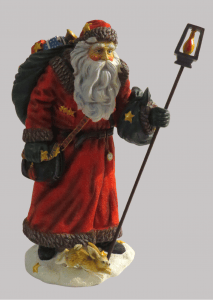 On Christmas Eve, the Star Catcher Santa enters the black forest to gather the stars which have fallen from the midnight sky. Accompanied by the forest animals, he treads through the pristine snow filling his knapsack with the golden treasures. The Star Catcher is guided by his lantern as he makes his way from one village to another, delivering his stars of light to waiting families. The star, shining bright, is the crown on top of the Christmas tree. Its light warms the hearts of those who bask in its glow and its meaning is remembered long after Christmas.

Star Catcher Santa is one of the original six old world Santa figurines of the Pipka Memories of Christmas collection. (Signed by Pipka). It is very rare to find with the original box. He is 11" tall and #213/3600.

There are no reviews yet.

Be the first to review “Star Catcher Santa” Cancel reply